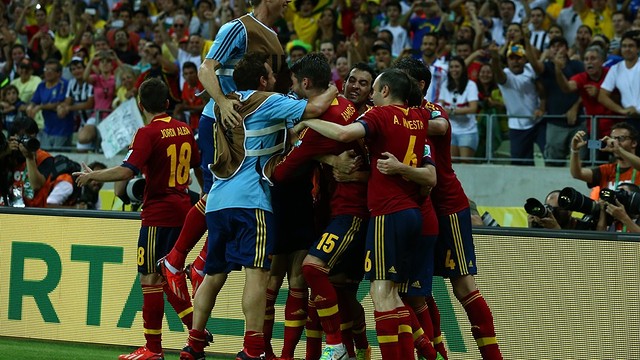 The Spanish national team, with six Barça players in the starting XI, defeat Italy to clinch a spot in the Confederations Cup final

This Sunday, at 12:00 AM, Brazil and Spain battle it out for the title

The final of the Confederations Cup will be tinted in blaugrana, especially after this evening’s match between Spain and Italy. Spain, with nine FC Barcelona players on the team, defeated Italy in the semi-final of the competition. Vicente del Bosque named six Barça players to the starting team – Piqué, Jordi Alba, Sergio, Iniesta, Xavi and Pedro – and they all had notable performances throughout the match. But despite the multitude of chances for both teams, nothing could break the initial deadlock and the semi-final was decided by a penalty shootout.

Italy, the better side in the first half

The match started with a far post shot from Pedro (min 3), but the Italians had a game plan to stop Del Bosque’s men, and it worked to perfection in the first 45 minutes. On 15 minutes Gilardino warned of Italy’s danger. Two minutes later it was Maggio with a header, which was brilliantly saved by Casillas. 60 seconds after Maggio’s chance, it was De Rossi who threatened to score the opener. On 36 minutes, Maggio once again had another chance on goal – perhaps the best of the first half – but Casillas pulled out a great save to deny the Italian. The Italians didn’t put away their chances against Spain, an unfortunate circumstance for the Azzurri at the end of the match as they were made to pay dearly for their inaccuracy.

Spain step up their game

Spain improved after the break. With the inclusion of Navas, who came in for Silva, Spain became more vertical in their play and the first great chance came after a great shot from the now Manchester City player on 58 minutes. On the 63rd minute, Iniesta blew past his defenders but his shot sailed wide. Piqué could have scored the match winner on 84 minutes, but his shot went high. With overtime looming, both Piqué and Sergio Ramos could have scored but they were also denied.

Overtime started with a shot to the woodwork from Giaccherini. After the close call, Spain laid siege to Buffon’s goal. The attack was led by Piqué, who possibly was the player who enjoyed the clearest chances in front of goal. Jordi Alba, after a fantastic pass from Iniesta, also could have scored the winner but his shot went high.

The chances were more scarce in the second half of overtime. The clearest, however, fell to Xavi, who sent the ball to the woodwork.

It was time for penalties after the 120 minutes of play. The same opponents who faced off in the semi-finals of the 2008 EURO, which was also decided by a penalty shootout, lined up to test their luck. Xavi, Iniesta, Piqué, Ramos, Mata were charged with taking the first five shots for Spain, and they all found the back of the net. The seventh penalty taken by Italy fell to Bonucci, who sent it high. Navas then slotted the ball in past Buffon to seal a spot in the final for Spain.

This Sunday, Spain will face Brazil in the legendary Maracaná stadium. Up to 11 FC Barcelona players could feature in the final.