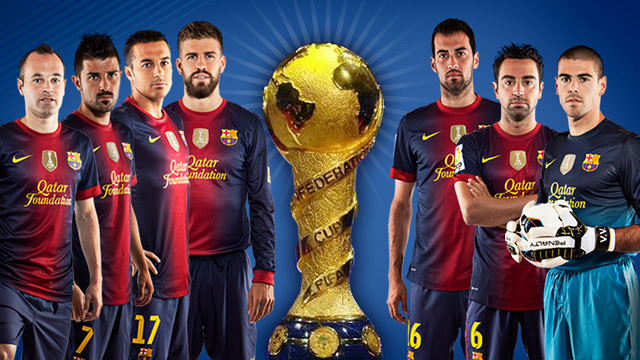 Valdés, Piqué, Busquets, Xavi, Iniesta, Pedro and Villa have won every club trophy possible with Barça as well as the European Cup and World Cup with Spain.

All seven players have winners medals for the Champions League, the Spanish league, the Spanish Cup, the European and Spanish Super Cups and the FIFA World Club Cup.  In addition they have all gained winner’s medals in the World Cup and the European Cup with Spain. Now they have another chance to add the only trophy they lack – the Confederations Cup – which Piqué, Busquets, Xavi and the now absent Puyol failed to pick up in 2009.

Puyol has collected the same eight winner’s medals as his teammates but has not been included in the Spain squad for the Confederations Cup.  Others, like Cesc and Jordi Alba, have yet to complete the full house of meals with Barça.  Cesc and Jordi Alba are missing the Champions League while the young defender has also yet to win the Spanish Cup and the two Super Cups.