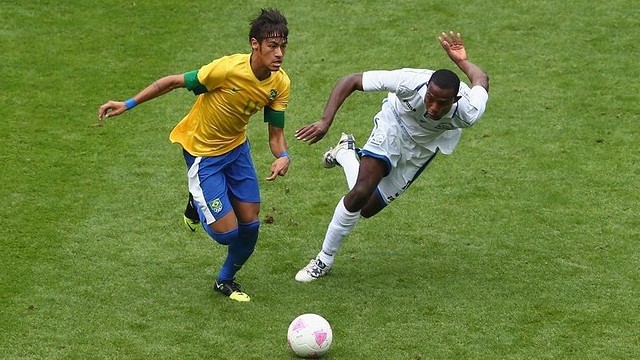 Wearing the legendary number 10 shirt, Neymar shone for Brazil in their 2-2 draw with England at the Maracana, before jetting off to Barcelona for his presentation on Monday

Brazil dominated in the first half and took the lead after the break through Fred, but England hit back with two goals from Oxlade Chamberlain and Rooney, before Paulonho equalised with a spectacular volley.

Neymar, who played the full 90 minutes, thrilled the Maracana crowd as he tormented the England defence with some good movement, delicate touches and incisive attacking play early on and only some great keeping form Hart kept the Barça man – playing alongside his new team mate Dani Alves – from opening the scoring.

The teams went in goalless at the break, though it was the hosts who looked the livelier and Fred deservedly pit them ahead just before the hour mark. Hodgson threw on the Arsenal youngster Oxlade Chamberlain and he soon made an impact with a well taken equaliser, before Rooney put England ahead with a shot that deflected off a defender to beat the keeper. Brazil are unbeaten against European teams at the Maracana since England’s last visit in 1984 and Paulinho ensured that record goes on with a superb volley six minutes from time .

Neymar flies off to Barcelona

Straight after his brilliant performance, Neymar boarded a plane to bring him to Barcelona where he will sign as a Barça player and be presented to the fans at the Camp Nou on Monday.