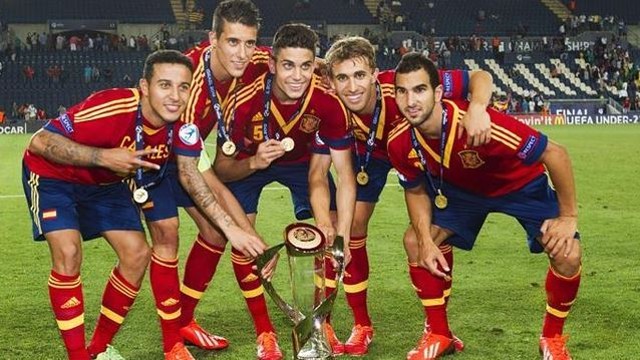 Bartra, Tello and Muniesa have won their first title for Spain, while Montoya and hat-trick hero
Thiago was the third top scorer in the competition and despite being a centre back, Bartra only committed one foul in the whole competition

On Tuesday, Spain’s U21 side won the European Championship for the second time in a row. Here we look at some of the stats of the Barça players in the squad:

• The title won in Israel is the first international crown for Bartra, Tello and Muniesa.

• Thiago also scored in the 2011 final, and got three more against Italy on Tuesday. “I haven’t scored three since the U14s”, he admitted after the match.

• Thiago is the third player to score a hat-trick in the European U21 final. He is preceded by Halilhodzic (1978) and Littbarski (1982). It was a complete hat-trick in every sense – one header, one with his left foot and a penalty with the right.

• Two Barça players played the biggest part in terms of minutes throughout the competition. They are Thiago (439 minutes) and Bartra (360 minutes), who were first and third, with Isco in between with 420.

• Bartra is a centre back, but only committed one foul in the whole tournament. Montoya committed five and forced one of the penalties in the final. The other was provoked by Tello.

• Four Barça players (Montoya, Bartra, Thiago and Tello) started four of Spain’s five games in Israel. Muniesa, the FCB player that participated the least, only appeared towards the end of the last group game against Holland