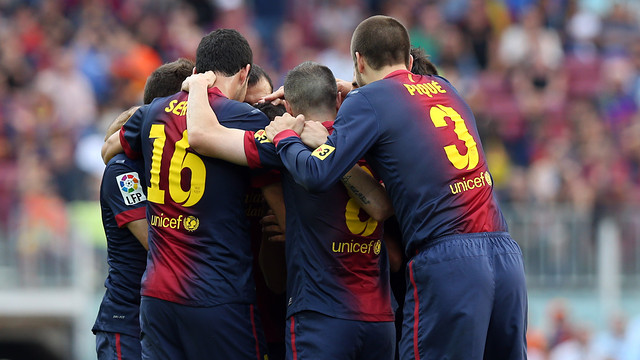 The team were three up after a quarter of an hour thanks to goals from Villa, Cesc and Montoya

Barça finished the 2012/13 season with a 4-1 win over Malaga to reach a hundred points for the campaign. Three up within the first quarter of an hour, the game was done and dusted before the break, before the spotlight fell on Iniesta – the scorer of the fourth, Pinto – who put in a great performance between the sticks and Abidal who bowed out to a standing ovation before receiving a special send off after the final whistle.

Three up early on

The 100 point mark was settled early on as first Iniesta, Pedro and Villa combined for the latter to open the scoring after just 3 minutes, before Cesc did a lovely one-two with Iniesta to fire past Caballero for the second. Two minutes later, Montoya made it three with a tremendous shot from the edge of the box.

The three goals also took the team level with the Club’s best goal scoring record, equalling last season’s 114 – but there was more to come!

Malaga come back into the game

Malaga woke up after the third goal and with nothing left to lose began to threaten Pinto’s goal Baptista had the best chance, but his effort ended in a corner and Barça went in atthe break with the three points looking pretty safe.

Iniesta treated the fans to a beautiful goal at the start of the second half, with a perfectly placed shot from outside the box. Pinto was also in the action with a great stop that brought the Camp Nou to its feet, but he was unable to stop Morales getting Malaga’s consolation goal from close in as he met a cross from the right.

With the result not in doubt, Vilanova brought on Thiago for Iniesta, Alexis Sánchez for Villa and when Abidal replaced Piqué the crowd gave the Frenchman a standing ovation every time he touched the ball. With chants of “Champions, Champions!” the Camp Nou crowd sent the team off after an unforgettable league campaign.