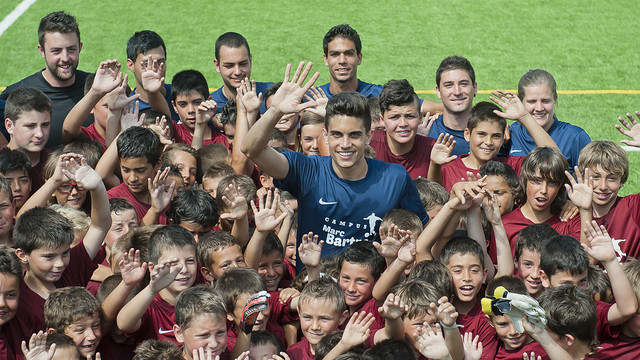 The centre half was positive about his season when he spoke at his Campus, which was attended by more than 90 children.

With his holidays about to start, Bartra insisted: “winning the European Under 21s has given me what I needed to relax now – now it’s time to refocus and start to prepare for the pre-season”

“I am very happy. It’s a great day for football, the town and the area”, explained Marc Bartra at the end of his football campus, which has been held in Sant Jaume dels Domenys since 25th June. Talking in front of the more than 90 children who attended the campus, Bartra claimed: “I didn’t expect this to be such a success – it’s fantastic to share your vision of the game with so many kids”.

It’s a dream to play at Barça

As the campus came to a close, Bartra explained “being a Barça player really attracts people and it’s been wonderful for the kids to share all this. I’m very happy with last season – it’s been a dream come true for me to be in the first team. There have been great moments and the hard ones will help me learn and continue to grow”.