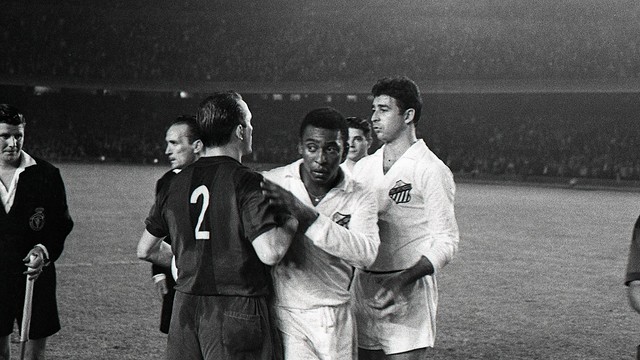 Santos FC, who were here as World Club champions, lost 2-0 to Barça

This Wednesday is the 50th anniversary of the last friendly between Santos, when Pele still played for the Brazilian side, and Barça at the Camp Nou. Against the odds, on June 12, 1963, Barça defeated the current world champions 2-0.

Santos was considered the greatest team in the world at the time. They had just beaten Benfica to claim the world crown, and would do so again a year later against AC Milan. And in the ranks was the man many were already saying was the best player the world had ever seen, Edson Arantes do Nascimento, or Pele, while the Brazilian national side had just won the World Cup for the second time in a row. That June 12 was a massive night in Barcelona – this was the chance to test themselves against the team that everyone was talking about.

For many of the 85,000 people in the stadium that night, it was not the first time they had seen the two sides play in the same venue. On June 28, 1959, the Brazilians had won 5-1, with two goals from Pele himself, although the FCB line-up had included a number of reserves. The game on July 2, 1960 was a much fairer reflection, with a full-strength Barça winning 4-3, and Pele again getting on the scoresheet for the visiting side.

Sadly, the 1963 game didn’t live up to the huge expectations. Pele wasn’t at his best and Santos took more of a tactical than ‘beautiful’ approach. Barça, knowing that they couldn’t match the South Americans for skill, opted for a gutsy, physical game and managed to scrape by with a 2-0 win thanks to late goals from Pereda (75) and Zaballa (87). Barça manager Josep Gonzalvo’s side that night was as follows: Sadurni, Rodri, Garay, Eladio, Vergés, Endériz, Cubilla (Zaballa, 56), Goyvaerts, Morollón, Re (Pereda, 56) and Fusté (Szalay, 46).

Pele, still only 22 at the time, was the focus of all the media attention. The cameras searched for his face and no other, and the local papers battled to come up with the best adjectives to describe the ‘the king’. This was the player that every major club in Europe was making inquiries about, but all would be in vain, for Pele would remain faithful to Santos right through to 1975, and then retired after an almost testimonial period at the New York Cosmos in the NASL.

Pele had already faced Ladislao Kubala in the 1960 match at the Camp Nou, and in September 1974 he got to face another great Barcelona legend, Johan Cruyff, in the Caranza Trophy match in Cadiz. Barça won 4-1 that day, but Santos were no longer the team they were, and Pele was already thinking about his move to the United States. Many years later, on August 25, 1998, Santos were the guests for the Gamper Trophy match, which Barça won on penalties after the teams had tied 2-2 in regulation time.

The last meeting between the sides is still fresh in the memory. That was on December 18, 2011, in the Clubs World Cup Final in Japan. Santos now had a new golden boy, Neymar, but were brushed aside, 4-0, by a simply staggering Barça performance. That was the night that Neymar pronounced the famous words “Barça have just shown us how to play football.” Words that have special relevance now that the Brazilian has joined the Catalan giants.