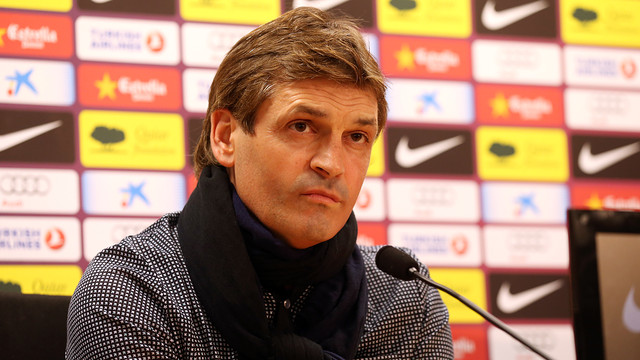 The manager believes that Neymar will “adjust quickly” to La Liga

Vilanova reiterates that he’ll stay on at the Club: “I cannot say it clearer, I cannot say it any louder. There is nothing to clear up. I will be Barça’s manager next season”

Tito Vilanova held a press conference this evening after the first team training session. The manager expressed his excitement at being able to field Neymar next season: “he’s a player who can play in different positions, not only on the left wing. He can also play behind the centre forward. We think he’ll adjust nicely, he’s a very talented player. He helps the team defend and tactically we’ll help him adapt to Spanish and European football. We should remember that all the big European teams wanted him and we are certain that he’ll perform at a high level. He can score goals, and that’s something we need.”

No doubt about his future

When asked about his future plans, Vilanova reiterated that he’ll be at the Barça helm next season: “I cannot say it clearer, I cannot say it any louder. There is nothing to clear up. I will be Barça’s manager next season.”

Along these lines, the manager explained that he would have understood if the Club had decided to look for a replacement while he was in New York receiving treatment, and that he’d understand the same decision if the Club looked for a replacement today. But that’s not the case, however. “When someone gets the illness that I had it’s normal for revisions to be made. It’s something the Club knows, I suggested it. No one can know what the future holds. At the moment, the doctors say I should move forward and that’s what I’m going to do.”

The future of Éric Abidal was also another hot topic of discussion during Vilanova’s conference. The manager reiterated that “it was a consensual decision by the Club” to not renew Abidal’s contract. He added: “I feel terrible about it. We know that we won’t find a left-footed centre back with his characteristics, we know that his case is exceptional. I hope he goes to a big club and that he gets the chance to show that he’s able to play at the highest level.”
[[CITA_1]]
Vilanova also confirmed that Abidal, who trained with the team this afternoon, will feature against Málaga on Saturday. It will be Abidal’s last match in the Blaugrana strip.

Without Abidal, Vilanova explained the need to bring in a new defender next season: “we need to reinforce this position, I’ve always said this. We also hope Puyol can recover well, hopefully he will be able to help us next year.”  When asked about the Barça captain, Vilanova noted that it’s strange that some would “doubt his professionalism. He’s the example to follow.”

Lastly, the manager talked about three members of his team: Valdés, Villa and Thiago. On the goalkeeper, he said, “as far as I’m concerned there’s no problem with him staying another year, his behaviour has always been exemplary.” He also admitted that he hasn’t talked with the Asturian forward about his future: “we haven’t spoken with him. My evaluation of his work is very positive.” Finally, when asked about Thiago’s situation, he said, “I can only say that he’s a very valued player. He’s Barça’s future and we’d like it if he stayed, but the decision is his.”

“It was a consensual decision by the Club and I hope Abidal goes to a big club and that he gets the chance to show that he’s able to play at the highest level”
“As far as I’m concerned there’s no problem with Valdés staying another year, his behaviour has always been exemplary”