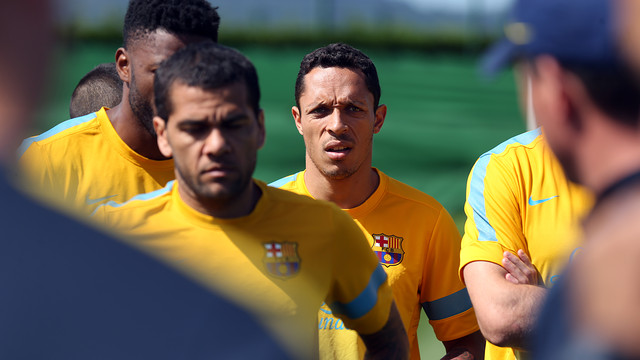 Barça were back in training this Thursday morning to prepare for the city derby against Espanyol on Sunday. Adriano and Alves rejoined the group after their respective injuries.

Jordi Roura led the session which was attended by all the squad’s available players: Abidal worked apart and Messi was with the physios.

After a well deserved three-day break, the squad were back in training this morning ahead of Sunday’s trip across town to face Espanyol. With Tito Vilanova in New York receiving treatment until Friday, Jordi Roura led the session.

Roura was able to work with all the squad’s available players, including Adriano and Alves who were back after injuries. Abidal worked apart and Puyol also did some recovery work, whilst Messi was with the physios. Gerard Piqué was given permission by the Club to miss the session to deal with a personal matter, but he will be back on Friday for the squad’s next session.