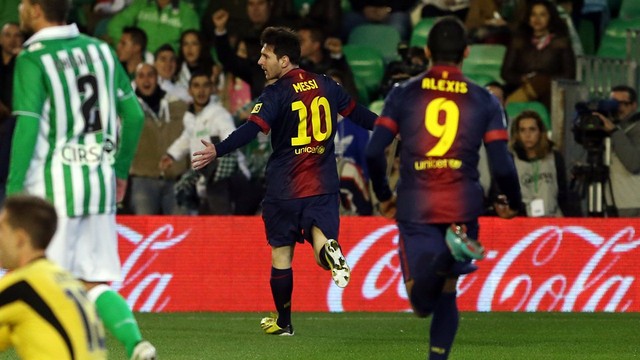 Barça took the three points from the Benito Villamarín in December when the Catalans were hosted by Real Betis. It was a nail-biter of a match as Messi scored an early brace – taking his tally of goals scored in a calendar year past Gerd Müller’s record – just to see Betis pull one back before the break. Betis went on to hit the post three times in the second half, but they were unable to equalize.

Real Betis are 7th on 49 points from 33 matches, just 4 points adrift of Málaga who are 6th – the last spot that gives access to the Europa League next season. It goes without saying that there’s a lot at stake in tomorrow’s match as the home team will look to secure La Liga title and the visitors will try to keep their dreams of playing in a continental competition alive.

Unfortunately, Betis manager Pepe Mel will be without a handful of key players for tomorrow’s match as Nacho and Cañas are suspended and Paulao, Perquis, Ángel and Castro are injured. Betis playmaker Beñat, who is doubtful for tomorrow’s match, is certainly the Andalusian team’s danger man as he’s scored a total of three goals and provided seven assists this season. However, beyond his ability to dole out assists and score goals, his true worth lies in the fluidity he brings to Betis’ game in the middle of the park.

Another man Barça will have to keep an eye on is Joel Campbell. The Costa Rican born striker will almost certainly feature in the Mel’s starting XI as Castro, whose 13 goals make him the team’s top scorer this season, will miss the match due to injury. Campbell is a quick and incisive footballer who, when positioned on the wings, can prove to be a handful for any defender.