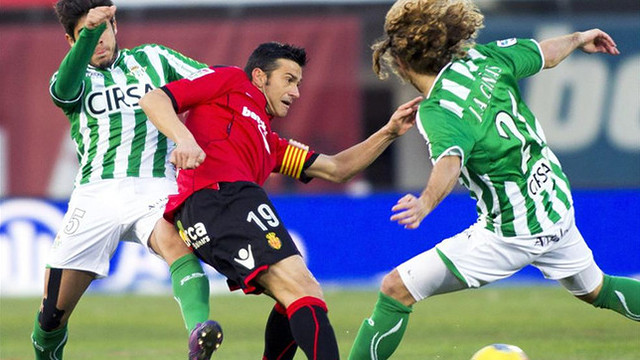 Mallorca and Deportivo both gave themselves a glimmer of hope with wins this weekend, whilst Real Sociedad and Valencia continue to go head to head in the search for fourth place

Can Mallorca and Deportivo really do it? Deportivo’s 2-0 win over Espanyol was their sixth unbeaten game on the run at the Riazor and with Zaragoza going down 1-2 at home to Bilbao, the three points took them out of the bottom three – one point ahead of Manolo Jimenez’s team on 35. Mallorca(32) sent Celta(31) to the bottom with a 1-0 win on Monday night against Betis, whilst Granada look to have ensured safety with a 3-0 victory over Ossauna that takes them to 39 points and leaves the Basques – with just one win in their last seven games – sitting just two points ahead of Zaragoza.

Will the relegation fight go down to the wire? The final two weeks see Deportivo at Malaga and at home to Real Sociedad (in a game the Basques will surely need to win to make the Champions League next season), Zaragaoza at Betis and closing at home to Atletico Madrid. Osasuna host Sevilla before travelling to the Bernabéu on the final day of the season, Mallorca go to the Vicente Calderón on the day Atlético will be celebrating their Spanish Cup win and then host Valladolid – who themselves entertain Celta next weekend before the Galicians close the season at Balaidos against Espanyol. With five points separating the bottom five, we could be in for another heart stopping final day of La Liga.

Real Sociedad’s win at Sevilla keeps them ahead of Valencia on goal difference in fourth spot, with Valverde’s side seeing off Getafe 0-1 . Mathieu scored Valencia’s winner just before the break, whilst Sevilla’s Rakitic was the protagonist at the Sánchez Pijuán, putting his team ahead early on and then scoring an own goal to bring Real level, before Agirretxe got his 14th goal of the season to give the Basques the win. Next week sees Real at home to Real Madrid and Valencia hosting Granada, whilst Sevilla’s final day visitors on the last day of the season are Valencia – will Emery be the man who thwarts his ex-team’s bid for a top four finish?