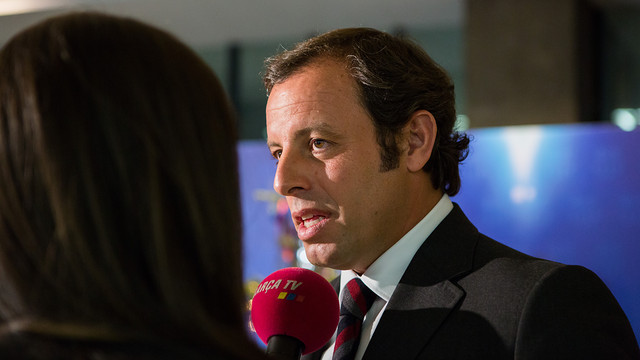 FC Barcelona’s director of football, Andoni Zubizarreta, also talked about Barça’s new signing: “Neymar is an important player and he’s coming to help; he’s talented and he has a special capacity to play football. Starting next season we’re going to enjoy him.” When asked about the team’s ability to reach 100 points in La Liga this season, Zubizarreta said, “the objective was to win La Liga. Everything else is just added benefit. The 97 points that we’ve won so far this season is borne out of the desire these players have to compete and their dedication to the team.”

After the Catalan derby at Cornellà-El Prat, President Sandro Rosell talked about the agreement with Santos for Neymar da Silva. “We don’t sign players to smack people around, we do it to improve our team even more. Each year we try to improve the team and we believe that Neymar can help us with our style [of play], even though this year has been fantastic,” he told TV3.

Rosell went on to say that there is no date set for the Brazilian’s arrival to Barcelona. He explained: “we have to talk it over with the Brazilian federation. We’ll present the player as soon as possible … The important thing is that we have an agreement.”

The events surrounding the derby

When asked about the controversial events – dressing the Columbus monument in the new 2013/14 kit, for example – leading up to this evening’s derby, Rosell said, “I agree with what our sponsors do. As far as marketing goes, it was a success. Our kit was seen throughout the world so we’re happy.”

On the guard of honour that Espanyol gave Barça before kick off, the president was clear: “while I’m president, any team that come to the Camp Nou as champions of La Liga will always receive the guard of honour. It’s fair play and we’ll follow this unwritten rule.”