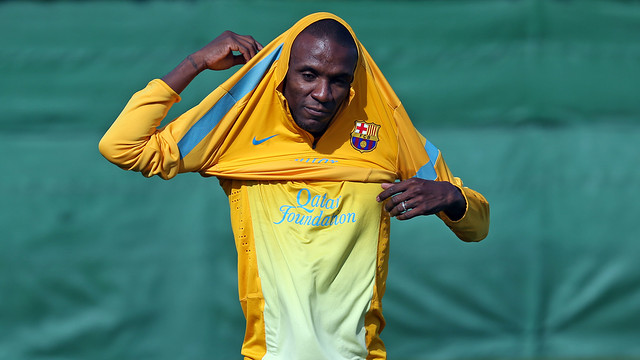 Thiago, Tello, Bartra and Montoya returned to training after returning from international duty with Spain’s U21 team

The first team took to the training pitch this afternoon ahead of tomorrow’s league match against Málaga. The men managed by Tito Vilanova were joined by Éric Abidal, who worked with the group. This Saturday, at 11.00, Barça will train one last time to prepare for their final competitive match of the season.

In addition to Abidal’s return to training, the four players named to Spain’s U21 side were also present. Thiago Alcántara, Cristian Tello, Marc Bartra and Martín Montoya trained alongside their team-mates. Leo Messi, on the other hand, continued his recovery work with the team physio, while Carles Puyol trained apart from the group.