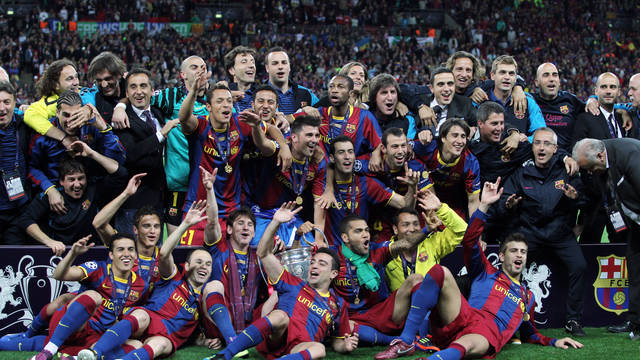 On May 28, 2011, Barça lifted the European Cup trophy for the fourth time

The venue was the new Wembley, the same place where they had won their first title in 1992 under Johan Cruyff, so there was added symbolism for the occasion. After winning a difficult and very high profile semi final with Real Madrid, Barça faced Manchester United in the final, the same team they had beaten two years earlier in Rome. Barça were by far the better team and cruised to a 3-1 win with one goal from each of the strikers: Pedro, Messi and Villa. It was an exhibition unlike anything seen before in a European final. The whole world watched in awe and the press was unanimous in its praise for the incredible Barcelona team.