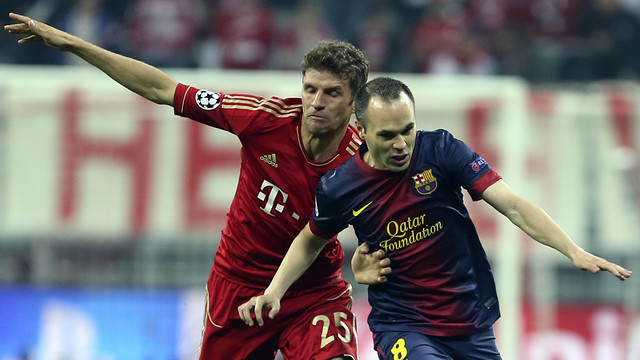 20.45 Champions League . The team needs to come back from the 4-0 defeat in the first leg to book a place at Wembley.

With Mascherano, Puyol, Abidal and Alba all out, the defence is the main selection headache for Tito Vilanova.

Semi-finalists for the sixth year running, Barça  can be proud to once again be amongst the elite of European football as they go into this season’s  final Champions League game at the Camp Nou.  And pride, as the giant mosaic to be unveiled at the ground says, is key to tonight’s game as Barça try and turn round the 4-0 result from the first leg eight days ago and win through to the final at Wembley – a stadium with a special place in Barça hearts.

Tito Vilanova can count on 19 players for the game, after Javier Mascherano, Éric Abidal and Sergio Busquets were finally ruled out on Tuesday. With Jordi Alba suspended and Puyol still out, Vilanova and his coaches will need to make some big calls as to who accompanies Piqué in the heart of the defence and who slots in at left back, with Adriano looking favourite to fulfil one of the roles.

The 4-0 win in the first leg was evidence of the strength of this Bayern Munich side, who were proclaimed Bundesliga champions a few weeks ago. It’s hard to pinpoint any weaknesses in the team and the Germans come into this second leg with no injury worries, although six of their players are just a yellow card away from suspension (Dante, Lahm, Luiz Gustavo, Javi Martínez, Schweinsteiger and Mario Gómez), which could influence Jupp Heynckes’ team selection. Whoever plays though, this will be a real test of Barça’s pride and belief.