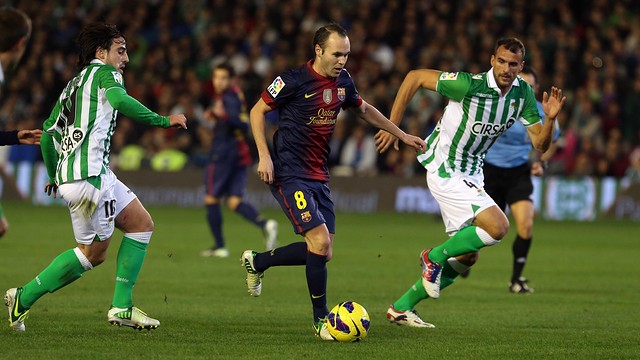 21h, C+: A win for Barça against Betis will bring the league title within touching distance

Valdés will definitely miss the clash while Messi, Busquets and Pedro are all doubts

Tonight’s match against Betis will have a huge impact on Barça’s possibilities of an early celebration of yet another league title. After yesterday evening’s win for Real Madrid, a victory against Betis would maintain Barça’s 11-point lead with just 12 points still up for grabs. But a slip-up against the Andaluses would narrow the gap ahead of next Sunday’s difficult trip to Atletico Madrid.

The players are fully focussed on the league after Wednesday’s heartbreaking European exit at the hands of Bayern Munich. An impeccable domestic campaign means that Barça enjoys a near unbeatable lead. Now’s the moment to clinch the title.

Injuries and doubts for both teams

Víctor Valdés has a painful inflammation of the left foot and joins Mascherano and Puyol on the injury list, while Cesc is suspended. Messi, Busquets and Abidal all took a full part in training on Saturday and could be back in action after missing out on the Champions League semi-final. Pedro is also a doubt after suffering a bout of gastroenteritis.

Betis manager Pepe Mel also has selection problems, especially in the back line, with defenders Ángel, Paulao, Perquis and Nacho all out. Midfielder Cañas is suspended but Beñat, who had back problems during the week, should be available. Pepe Mel has drafted in two youngsters from the reserves to complete his squad.

The matches between Barça and Betis in the Camp Nou have traditionally produced plenty of goals and Barça hasn’t lost here against the Andaluses since 1998. However, Betis has one of the best away records in La Liga this season and they need to get something from the match to keep their European ambitions on the boil.