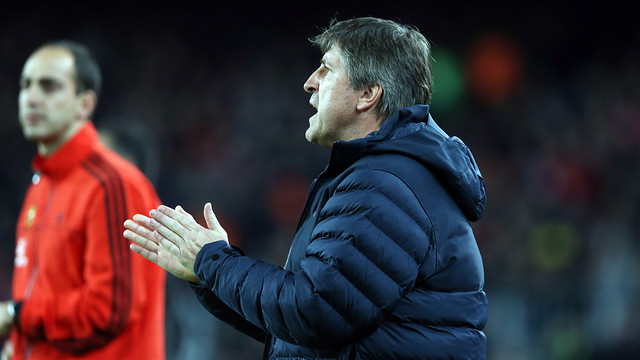 The Blaugrana won their seventh Copa Catalunya this evening after beating Espanyol on penalties. After the match, assistant manager Jordi Roura said, “we’re very pleased with this title seeing that it’s been years since we last won it.”

The FC Barcelona assistant manager highlighted the performance put in by his players this evening. “In general the team competed well, and that’s what I want to point out. After everything we’ve done, we came were and we competed at our level.” He went on to congratulate the Lleida public who made it to the Camps d’Esports: “it was extraordinary. The atmosphere was fantastic. It was a great match and the people enjoyed it.”

When asked about Deulofeu, Roura said, “in the first half he played on the right, and he wasn’t performing at his best. In the second half we switched him to the left and he opened up the pitch and looked for one-on-one plays. He’s a special and different player.”

“Kiko Casilla was stellar. In the second half we had a lot of chances and in the end we managed to score.”

“It’s another title. I have a lot of Copas from when I played in the youth system, but none playing for the first team.”

“The Copa Catalunya is exciting because it’s my first one. I had won it what I was in the youth system.”

“It was a high-quality final.”

“Neymar is a very charismatic player, he has a lot of qualities and he can score. He’s one of the best players in the world and it’s normal the he gets a big presentation.”