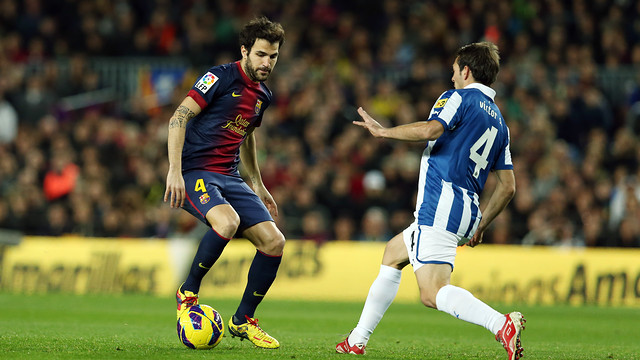 21.30, TV3: Barça and Espanyol will contest the Copa Catalunya in Lleida just three days after meeting in the league

Barça will be taking a full squad apart from Valdés and Iniesta, plus eight members of the reserves

There’s another derby tonight in Lleida. Barça and Espanyol meet in the Copa Catalunya final at the Camp d’Esports just three days after the former won 2-0 against the Parakeets at Cornellà-El Prat in the league. These are the two teams with the most titles in this competition, six each.

Barça are looking to win a title that has eluded them for six seasons. And they will have to do so with a number of enforced absences. Messi, Puyol and Abidal are all injured, while a number of players are away on international duty, namely Dani Alves, Bartra, Montoya, Muniesa, Thiago and Tello. All the available first team members will be travelling to Lleida apart from Valdés and Iniesta.

The squad of 21 is completed by eight players from Barça B: Oier, Espinosa, Balliu, Deulofeu, Sergi Gómez, Sergi Roberto, Rafinha and Patric.

Espanyol go into the game with Sunday’s defeat at home to FCB fresh on their minds, one which definitively put an end to their European aspirations. Despite a dreadful run of just 1 out of the last 15 points, the blue-and-whites have been safe from relegation for some time, and are currently merely playing out the remainder of their fixtures. Javier Aguirre can therefore draw on a full-strength squad this evening, although Mexico’s Héctor Moreno is away on international duty.