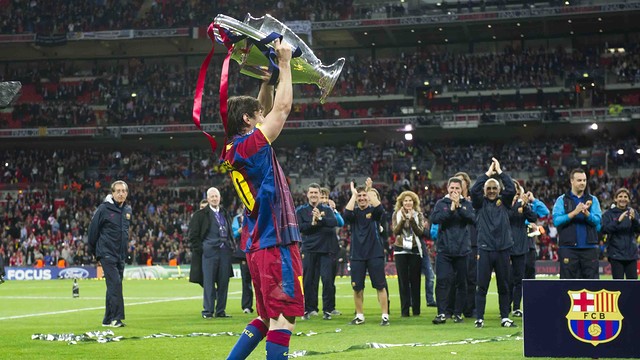 Since 2006, if Barça haven’t won the Champions League, the team that knocks them out has almost always been the eventual winner

Barça’s fourth and to date final Champions League crown was conquered at Wembley in 2011, and once again the opposition was Manchester United. The Catalans were simply stunning as they won 3-1 with goals from Pedro, Messi and Villa. In the last two editions, the side to beat Barça has gone on both times to lift the trophy. In 2012, Chelsea knocked out Barça and went on to win their first ever European crown, while this season, it was Bayern Munich who beat

In the last seven editions of the Champions League, beating Barça has almost always been the key to success. The Catalans have won three times, and on three others they have lost in the semis to the eventual champions. The only exception was in 2007; when they lost to Liverpool in the quarter finals, and the Merseysiders went on to lose the final to AC Milan.

Three out of eight

It all started in Paris in 2006, when Barça won the title for only the second time in their history. That side featuring players of the calibre of Valdés, Puyol, Xavi, Iniesta, Ronaldinho, Eto’o and Deco beat Arsenal 2-1 at Saint-Denis. A year later, their title defence ended in the last eight against Liverpool, but the English side failed to capitalise and ended up losing to AC Milan 2-1 in the final in Athens.

In 2008, it was another Premiership outfit, Manchester United, who put an end to Barça’s campaign, this time in the semi-finals (0-0 and 1-0) and Alex Ferguson’s side went on to claim the title by beating their EPL comrades Chelsea on penalties in the Moscow final.

In 2009, Barça reigned supreme once again, this time in Rome against defending champions United, winning 2-0 thanks to goals from Eto’o and Messi. In that first season under Pep Guardiola and Tito Vilanova, Barça also won the Copa del Rey and La Liga to complete the first ever Spanish treble.

In 2010, Barça’s progress was halted in the semi-finals by Inter Milan. The Italian side, managed by José Mourinho, went on to win the final by beating Bayern Munich 2-0 at the Santiago Bernabéu.