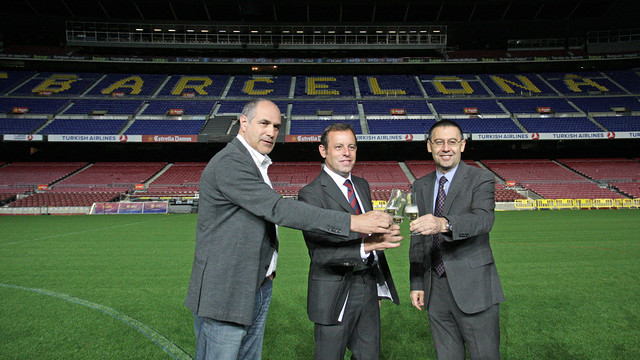 Barça’s Director of Football has emphasised the consistency of the team throughout the season and their determination to stick to the Club’s trademark style of play.

Zubizarreta stated: “We have to keep on developing this idea and that’s how we’ll look at it at the beginning of the next campaign”.

Josep M. Bartomeu: “We should be very happy indeed”

Speaking on Saturday evening, Andoni Zubizarreta said: “People were talking about the end of a cycle but we’ve won the main title again, the title of consistency.  The squad has been able to maintain a cruising speed with an incredible ability to compete”.

According to Zubizarreta, the league title is the fruit of an idea: “We have to be clear where we’re coming from.  We have to stick to our style and Tito accepted the challenge of maintaining it.  We’ve tried to do that the best way we know how.  We stick to this style even though it’s sometimes not enough for us to win, like the day against Bayern”.

“We have to keep on developing this idea and that’s how we’ll look at it at the beginning of the next campaign”.  Zubizarreta also stressed that most of the players needed to develop this style are already at the Club: “If we look at our squad, 80% of the players that would interest us are already part of FC Barcelona.  As always we’ll analyse what needs to be improved but the base is solid and we’ve already got it”.

Josep M. Bartomeu was in complete agreement with Zubizarreta and revealed: “There’ll just be a few changes.  It’s a very competitive team and it’s very difficult to substitute the pieces.  There aren’t such good players in the market!”

Obviously, there’ll be time to talk about the future, but Bartomeu and Zubizarreta emphasised on Saturday that right now it’s time to celebrate the league title. Bartomeu told us: “We should be very happy indeed”.

“Our team, our coaches and the people of Barcelona deserve the open top bus tour next Monday.  I hope that all Barça fans are there in the streets”.  However, he revealed that the best moment of the season for him had been the return to health of Tito Vilanova and Eric Abidal: “There are times when people come before sport”.