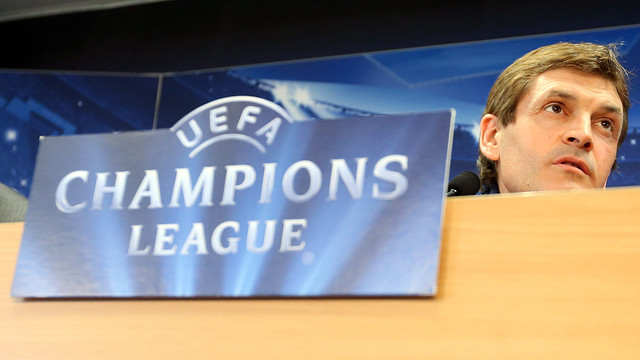 The manager believes that his players need to go into tomorrow’s match against Bayern with cool heads: “we have to play a good game and be the better team, then the goals will come”

“We believe we can fight back, it’s our obligation and we’re convinced [it’s possible],” said Tito Vilanova this afternoon ahead of tomorrow’s Champions League clash with Bayern Munich. “We know that it will be very difficult, but we are Barça and we can never give up on a tie especially when we have 90 minutes of play at home.” Vilanova is convinced that his men will leave everything on the pitch, even if, in the end, they cannot overturn the 4-0 from the away leg. “We have to hold our heads high if we are eliminated, we cannot give up; we need to make our fans proud.”

In addition, the Blaugrana manager admitted that Bayern played an excellent game last week, but the end result was too harsh. “Bayern played a great game but they had a series of favourable situations in their favour. We should have lost that match, but not by so much.”

The power of the Camp Nou

The support from the Camp Nou faithful on Wednesday will be crucial if Barça are to get to the final in Wembley. “If we are going to mount a comeback we need our fans. Both Bayern and Borussia had extraordinary atmospheres last week and that carried the teams forward. We will do our part so that fans find it easier to do theirs.”

“Messi will have things to say”

The manager confirmed that Mascherano won’t play tomorrow: “he picked up his injury four weeks ago and it takes six to recover, he won’t play tomorrow.” Messi, however, won’t miss the match: “the more in form he is the better our chances of getting to the final, but we can’t heap this kind pressure on him, we have to try to help him. A player as good as Messi, at this point in the competition, will have things to say in tomorrow’s match.”

We have to hold our heads high if we are eliminated, we cannot give up; we need to make our fans proud
We have to be ourselves and try to play a good game of football. We need to score goals through our style of play
If we are going to mount a comeback we need our fans at the Camp Nou