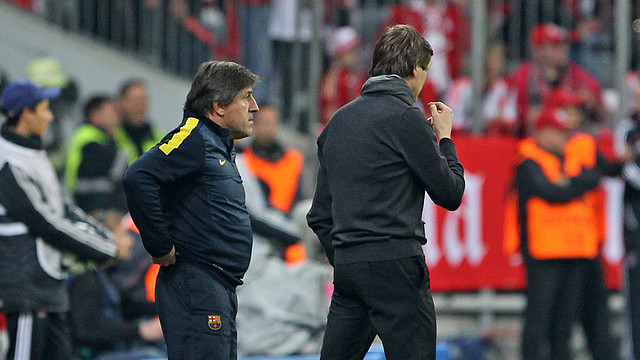 The manager says that Bayern “were the superior side,” and that Barça are “obligated to fight in the return leg”

After this evening’s 4-0 defeat to Bayern Munich, Jordi Roura explained that his “players are sad and frustrated.” He added: “This was a game that we were excited about and the result is awful. We’re all sad but this is football. We have to keep on going. The defeat is very painful and it complicates our chances of getting to the final.” Even though the 4-0 will be difficult to overturn, Roura warned that Barça will fight tooth and nail in the return leg: “We will try to turn this tie around in the return leg. Miracles are hard to get and the 4-0 result is complicated, but our obligation is to fight as hard as we can. We will keep on trying until the referee blows the final whistle.”

“We competed well in the first half”

The assistant manager said that “in the first half we competed well but they scored from a set piece and we knew coming into the match that they were a physical side; strong and powerful. In the first half we had our options.” He added: “What hurt us the most was the second goal. We tried to carry on but Bayern made it very difficult.”

Roura also gave his opinion on the referee’s performance: “There were a couple of goals that were clearly illegal. We haven’t been lucky throughout the competition this year and we weren’t fortunate with the decisions tonight but I won’t say that the referee had an influenced on the final result.”

The assistant manager went on to thank Leo Messi for working hard in order to be available for selection against Bayern Munich. “Leo put in an incredible effort to be here. He managed to play the 90 minutes and he did what he could. I’m proud of how hard he worked to be here.”