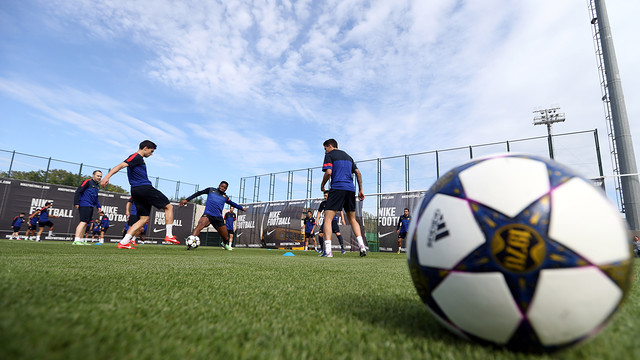 The Catalan and the Frenchman, both of whom are injured, were not named to the team ahead of tomorrow’s match

Carles Puyol and Javier Mascherano trained apart from the group

Barça took to the training fields of the Ciutat Esportiva Joan Gamper this Tuesday afternoon to prepare for tomorrow’s crucial Champions League match against Bayern Munich. On Wednesday morning the players will complete one final training session, at the Camp Nou, before kick off.

Sergio Busquets and Éric Abidal will not feature in tomorrow’s match. The midfielder has not recovered from the injury that kept him from playing against Athletic Club this weekend, while the Frenchman has picked up a calf injury. Carles Puyol and Javier Mascherano took part in today’s session, but they did so apart from the group.

Tito Vilanova has named 19 players to the team for tomorrow’s match against Bayern. The manager was not able to select Jordi Alba, who is suspended. Busquets, Abidal, Puyol and Mascherano, all of whom are injured, were not named to the team.