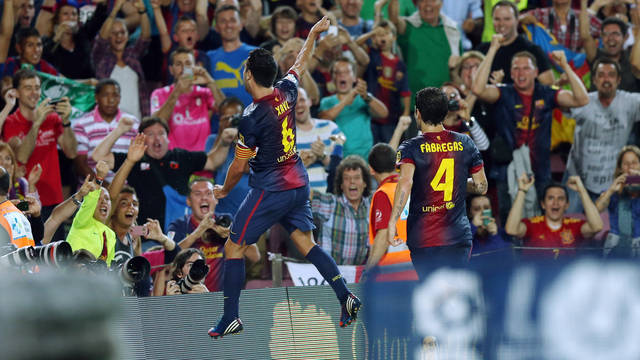 The players agree that the team has a “winning dynamic”

Next training session on Tuesday at 19.00

FC Barcelona’s first team players will return to work on Tuesday, September 25, at 19.00 at the Ciutat Esportiva. The players will have Sunday and Monday off.

Xavi Hernández was overjoyed with Barça’s win this evening against Granada: “These three points against a well-organised Granada team are very important, they were very disciplined. It was a very complicated match but we won the three points and that’s what’s important.” The Catalan midfielder praised the visiting side’s goalkeeper: “Toño was spectacular, he saved nearly everything. The only thing that beat him was a shot from outside the area that went into the upper 90.” He added, “I’m very pleased that I scored and for what the goal means to the team. We won the match and we have a winning dynamic.”

The Barça vice-captain said that in “other seasons we wouldn’t have won this match but tonight we did. This is what it means to have a winning team.” On the distance the separates Real Madrid from Barça, Xavi was prudent: “Let’s see what they do on Sunday, but our record so far is perfect. 15 out of 15, it’s a good dynamic. Let’s see what our advantage looks like tomorrow.”

Here are the statements made by the Barça players after tonight’s match at the Camp Nou:

“Every victory is important, but today’s was more difficult than others, but we have to be able to make it through these types of games. This isn’t to say that we did a poor job, rather our opponents played a good game.”

“I think this team is defined by the patience it displays throughout the whole match. We try to be constant in our attack, there were a couple of times where they came close to scoring but we had to take the risk. We played really well, but their keeper played better than us.”

“It’s important for us to win all three points, independently of what other teams do. It’s time to focus on next week.”

“The teams we come up against are closing themselves off at the back more and more and we need to be patient and attack in an organised manner and find the few spaces they leave us. This victory is due to our consistency and patience.”

“In the first half all of our attempts were blocked by some player’s foot or body and that’s really difficult to overcome. We have to continue like this because it’s our philosophy and it’s hard to change. We need to keep on working like this because we’re going to come up against these types of teams in the future.”

“We know that all of the teams are really hard to play against but I’m sticking with how we reacted in the second half. Toño played the game of his life, we came up against a rock in goal that saved everything we threw at it.”

“Starting off well is important. There will be times during the season that we won’t do as well as we’re doing now and we have to take advantage of our form. It’s excellent that we’ve won 15 out of 15 points.”

“I feel better each day, but I need that one goal. I had three good chances in the second half but they were all saved brilliantly. In the first half I had a chance but it’s true that sometimes they go in and sometimes they don’t. The important thing is that the team won and that we all have a good feeling about how things are going.”

“The important thing is winning and if you can’t score, try and help your teammate score. Xavi scored tonight, so I’m really happy.”

“It’s an important week, we have a couple of days off – I’m going to spend them at home with my family. Then it’s time to prepare for the really difficult match we have on the weekend.”

“It’s too early [to tell how the season will go], we’re putting a bit of pressure on them [Real Madrid] and they have a tough match against Rayo. We can’t relax because Real Madrid always operates well under pressure.”