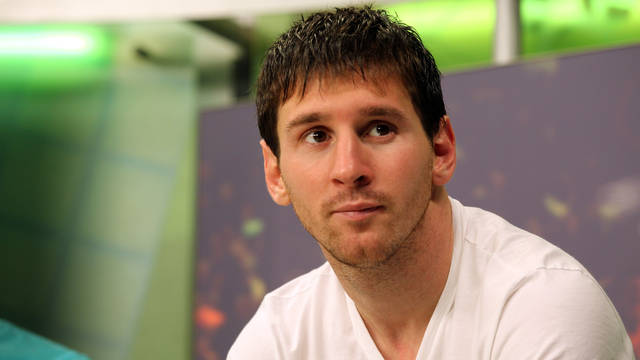 Speaking on TV, Messi denied any falling out with Villa and revealed that their heated discussion on the pitch was just “the tension of wanting to score”

“My aim isn’t to go one better”

Messi, who won last season’s Golden Boot with 73 goals, is not setting himself any record-breaking target for this campaign: “My aim isn’t to go one better or score goals.  The most important thing is that the team keeps on winning.  If I score, then better but if I don’t, this team has plenty of ways of scoring”.

“I haven’t got any problems with ‘El Guaje, quite the opposite”

Messi admitted that there was a long way to go in the season but highlighted the team’s great start: “It’s good not drop points at the beginning, something that always happened in the last few years”.

But above all, Leo Messi was determined to squash right from the start any debate on a possible rift between him and Villa, following on from an exchange of words the players had during the Granada game.  In an interview for Barça TV’s ‘El Marcador’ programme, he explained: “People shouldn’t look for a problem where there isn’t one. We’ve got a spectacular squad.  These things are part of football, with the tension of wanting to score to make everything easier and win.  It happens in training and in matches as well.  I haven’t got any problems with ‘El Guaje, quite the opposite”.  In fact, Messi went on to stress: “These things show the character of the team to want to win and keep on playing well.  We get ‘heated’ because we want the best and the tension makes you react like that”.

“It’s good to start this way”

Messi also singled out a great start to the season which has seen the team win five league games out of five and take a firm hold on the top of the table. “We have to carry on this way but keep in mind that there’s a long way to go.  But it’s good to start this way and not drop points at the beginning, something that always happened in the last few years”.

However, Messi admits that the team can still improve and proof that they’re not firing on all cylinders just yet was the performance against Granada: “Perhaps we were a bit asleep in the first half but in the second half we found more space and created more chances.  It difficult to play against teams that close down at the back.  We had more difficulty in the first half because we needn’t to play faster.  If we win without being at 100% perhaps later it’ll be easier.  It’s a long (season) but we have to keep up this dynamic”.