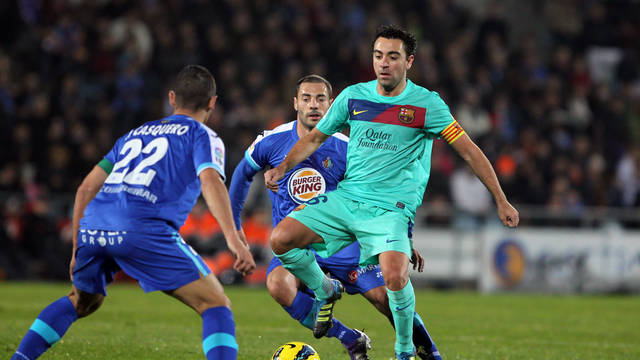 20.00, Gol T and Canal+ Liga –Barça go on a never easy visit to the Coliseum Alfonso Pérez looking to make it four wins out of four in La Liga

His cheekbone now recovered, Puyol returns to the 19-strong squad that includes two Barça B players in Tello and Deulofeu

Getafe on Saturday will be a stern test for the Liga leaders. They have three wins out of three ahead of the trip to the Coliseum Alfonso Pérez, and coaches and players alike have been saying this week that the main aim is to maintain that lead for the Real Madrid match at the Camp Nou. But Tito Vilanova has already warned his players about the dangers of a game at Getafe, a side that as already shown what it is made of by beating Madrid in their only other home fixture played to date.

What’s more, Barça lost on their last visit to Getafe, one of just two defeats in the whole Liga season. The other was at the Reyno de Navarra. Curiously, Barça have already avenged that defeat with a 2-1 win in Pamplona and now have the chance to avenge the other at the Coliseum Alfonso Pérez, where a win would also confirm one of the best starts to a league campaign in recent years.

Missing Iniesta, Alexis and Alba but Puyol is back

Vilanova is missing both Iniesta and Alexis due to injuries sustained while away on international duty. Jordi Alba also misses the trip with flu. But the positive news is the return of Carles Puyol from his absence with a cheekbone injury. The squad travelling to Madrid includes 17 players from the first team plus Barça B’s Tello and Deulofeu. There were no places for Fontàs or Dos Santos.

Barça are facing a team that has four points so far this season, the same as sides like Atlético Madrid, Real Madrid and Levante. Luis García has a highly competitive set of players under his command, with plenty of new blood added over the summer, including experienced players like Moyà, Lafita and former Barça man Xavi Torres, and such promising youngsters as Álvaro Vázquez. Players heading in the opposite direction include Miku, who has been loaned out to Glasgow Celtic.